Enjoyable, challenging, productive and rewarding are the words that immediately spring to mind when I look back over the last year during which I have been facilitating this art project at St Cecilia’s School.

The art sessions took place for an hour and a half once a week in Jan – March ‘10, May – June ‘10, Oct – Dec ‘10 and Jan – Feb ‘11. During the last academic year, there were 28 students participating. They were divided into 4 groups and I worked with each group for 20 minutes. During this academic year, because there are fewer students, we have reduced the number of groups to three and I spend half an hour with each.

Because my contact time with the children is so short and many of them have limited motor skills, planning and preparation are particularly important.

The aim of the first eight sessions was to produce a wall-hanging for the school’s newly refurbished dining room. This was the space in which the art sessions were held. It is ideal: bright and airy, with good tables, chairs to suit all sizes, and easy to clean surfaces.

We started the project working with paper, crayons, paint and paste – materials with which the children were already familiar – making small square collages. Using the various shapes I had cut out in advance and adding their own exciting marks, doodles and words, they were soon producing wonderful pieces. By the end of the fourth session we had enough paper collages to make several small, temporary wall-hangings for the different classrooms.

During the following four workshops we used canvas squares, the same size as the paper ones. The children first painted these and then made collages of them, using fabric shapes, ribbon, braid and wool.

Each student contributed at least one square – and some as many as three – to the final art work which I assembled for them. Entitled “Outside The Box”, it now hangs in the school dining room. 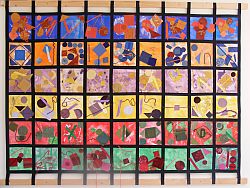 I returned in May for six sessions which were not product driven but more about creative play using an air-drying clay – a less familiar medium for the students. This proved to be a little too challenging initially so we worked with play dough instead.

Although ‘product’ was not important at this stage, many of the children made pieces good enough to bake and paint. They made figures, beads, and shapes of all sorts that they decorated with marks, using a variety of ‘tools’ such as straws, potato mashers, lollipop sticks, bottle tops, as well as conventional clay- modelling tools.

Repetition of the techniques, and using the same tools and medium over several weeks is good for learning new skills. But there is a danger of boredom. To avoid this, I added colour to the dough after a couple of weeks. Everyone – staff and students alike – tackled the medium with renewed interest.

This ground work with the playdough paid dividends when I reintroduced clay as a medium in the next round of art sessions. Already familiar with the tools and techniques, it wasn’t long before we had a growing collection of mini clay ‘sculptures’.

At this stage it seemed natural to shift the emphasis of the sessions from creative play ( process ) to the creation of another group art work ( product ).
I prepared batches of clay tiles and the children worked on these – carving bits out of them, adding texture to the surfaces, sticking extra bits of clay onto them. When they were dry, we spent a wonderfully messy session painting them.

Two more sessions of making and painting produced another batch of beautiful tiles which, after varnishing and mounting on a board, will make a second dramatic group art work for the school dining room. 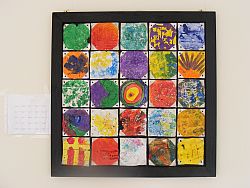 There were sessions during the year that became a bit chaotic. This occurred when there were more students in a group than usual or when some activity during the day had disrupted the normal routine. The children are sensitive to these changes and can become agitated and a bit disruptive. But even on days like that, the creative activity ( whatever the medium ) can bring calm and quiet.

I enjoyed the work and, apart from the obvious one of having helped the children make two good examples of Outsider Art, there were many other rewards along the way:
Like the day a wheelchair-bound girl who had not shown much response to either the medium or to me, suddenly did so. Taking hold of my hand, she made me pat the clay in the way I had been showing her. And then she gave me a big smile.

Or the day one of the boys enjoyed working with the clay so much he did not want to leave when his group’s time was up. Fortunately the staff are understanding and flexible so he was allowed to stay on.

Or watching in delighted amazement as one of the more hyperactive children worked at great speed on more then one paper collage at a time.

The patience and assistance of the staff and the encouragement and support of the principal made the work enjoyable. Their commitment and enthusiastic engagement in the project throughout the year were invaluable.

This entry was posted in News. Bookmark the permalink.